Are you streaming audio?

Do you listen to hi-res?

“High-resolution audio (High-definition audio or HD audio) is a technical and marketing term for audio with greater than 44.1 kHz sample rate or higher than 16-bit audio bit depth. It commonly refers to 96 or 192 kHz sample rates. However, there also exist 44.1 kHz/24-bit, 48 kHz/24-bit and 88.2 kHz/24-bit recordings that are labeled HD Audio. “

The above Wikipedia definition of hi-res includes 24/44.1k, which may also be referenced as HD. When what I refer to in this post as my DXD and other masters are played as TIDAL Masters (MQA) through a Mytek Brooklyn USB MQA/DSD DAC or an iFi Audio Pro iDSD USB/Wifi MQA/DSD DAC the bitstream is reported by the DAC (Mytek and iFi Audio) to be 24-bit 352.8k (or 24/384k) MQA.  This is, according to any definition in the so-called audio industry I am aware of, known as DXD.  I don’t make this up. I report it as it is presented by the industry authorities and experts of digital audio. If the source bitstream is not a folded MQA encoding, it will be reported by these same devices as either 24/44.1 or 24/48 — both of which according to Wikipedia above also qualify as hi-res.

In addition, there are a number of streaming services apart from TIDAL that deliver bit perfect, lossless streams of their source audio files. I have played my MQA 44.1k masters through the Qobuz iOS player at 24/44.1k (routed via WiFi to Pro iDSD DAC/preamp) and they are properly recognized as MQA 24/44.1k on the iFi Audio Pro iDSD USB/WiFi MQA DAC. As long as a bit perfect stream is delivered to the gear decoding MQA, the MQA authentication is preserved through streaming services such as TIDAL, Qobuz, Deezer, 7digital, and others.

Finally, in 2019 alone, a number of MQA equipment partners were recognized by the music industry at many levels with awards for their excellence in sound quality. These are not money hack grubbing shyster types of people and businesses. These are some of the more respected names in the beloved & sacred music industry. For those who choose to accuse others of nothing more than base and ill motives (ie, money) for their pursuit of better sound in a newly emerging hi-res, highly compact and deliverable/streamable, carefully researched and listened to listened to listened to new audio encoding that requires extensive listening and comparison rather than only spec reading to evaluate, let those accusers at least know the scope of the indictments they are passing without jury onto others characters, with or without snake oil expletives.

“MQA is quite an emotional experience. One of the great pleasures of MQA, beyond its ability to give the listener high resolution sound, is having a true center come out of two loudspeakers or earphones.” – Bruce Botnik, longtime The Doors engineer

TIDAL streams hi-res as MQA Remasters. Their iOS/Android/Windows player decodes to 24/96 without buying any new hardware. Right now there are over 23,000 albums and singles in the TIDAL “Masters” catalog. These usually appear with the letter “M” on the thumbnail.

There is a list online that gets updated twice a week with the current MQA Masters album list on TIDAL. You can download it as a CSV file and open it in Excel anytime.

There are some of my all time favorite albums in this list including (random picks) Bowie’s Ziggy Stardust, Todd Rundgren’s Faithful, Talking Heads 77, The Stones Let It Bleed, Yes Fragile, Steve Earle Copperhead Road, Tom Petty (they have just about all of them). Create your own playlists and have at it.

Yeah But Does It Really Sound Better?

Yeah, it does. PCM never sounded so good to my ears after about 35 years of trying, until I heard MQA encoded masters. I’m talking about CDs (PCM) and other hi-res up to 24/192k. I hated CD sound then I found DSD and never looked back for what sounded good digitally for audio. But everyone was still listened to CD and PCM streaming….Then I found MQA for all of those people hearing CD quality and worse (MP3, AAC) all the time. I had a lot of music recorded for CD since the mid 90’s. It needed help. MQA helped it a lot. It could also make my DSD available for listening to people not setup to hear DSD. And it still sounded darn (damn) good.

MQA is good for CD, it doesn’t have to be hi-res. I don’t notice the press talking/writing/blogging much about this but I hear the most improvement on regular CD masters at 16 or 24/44.1k. I have my work to compare first and foremost to my ears here. That’s why I had my whole CD collection reencoded as MQA. They all sounded much better that way, more like what I heard when I was recording and mixing them. The MQA “math” also points to its biggest improvements at the lower resolution masters like CD where brickwall filters typically used for studio recording/mastering induce the highest incidence of pre-echo ringing on the results. MQA removes this unnatural edgy artifact from the master so it sounds more like analog when you listen to it, especially if it’s acoustic and vocal and not compressed to start with.

The hi-res 24/96 and above streams at the lower bitrates from TIDAL. That means you won’t use lots of data (around 1 to 1.5mbps) to listen to the music coming in at 24/96, 192 and higher. MQA has a “folding” technology that saves data space which means small files for downloading and low bitrates for streaming.

You can try TIDAL free for 30 days from their web site at TIDAL.com

Thank You NativeDSD & Listeners in Lots of Countries 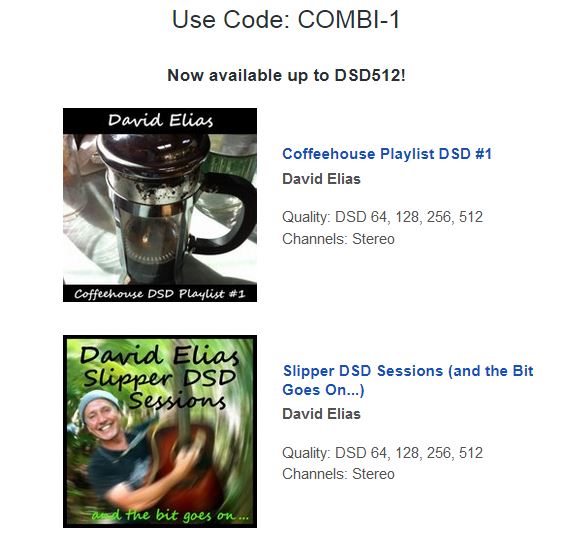 Huge thank you’s for all who took advantage of the COMBI-1 discount new downloads for Higher Rates Program (HRP) up to DSD512.

In February 90% of those buying my DSD downloads at NativeDSD.com were selecting remaster rates above the original DSD64.  These higher rates are another evolved technology that brings huge smiles to listeners ears, mine included. Thank you NativeDSD!