I was graciously asked by Brian Moura at NativeDSD.com to listen to and critique some of their newest Native DSD releases which come from Tom Jung at DMP.  The releases were provided as both DSD64 and DSD256 masters for download and comparison. I listened to the works using JRiver version 24.0.75 on Win7 Pro x64, the iFi Audio xDSD headphone amp/DAC and OPPO PM-1 planar magnetic headphones.

The first selection was a Choral/Sacred release called “Sacred Feast” by Gaudeamus, directed by Paul Halley. I have been familiar with hi-res choral and classical works since being introduced to DSD in 1999. Early SACDs soon appeared to my ears from 2L, Telarc and others lables including DMP.

From the interview link below Tom Jung seems to have first used one of the same early Sony prototype 2-channel DSD archive machines that I was first introduced to for DSD recording.  He then went on, as I did, to use the earliest Sony multichannel DSD recording workstations for 5.1 SACD releases including “Sacred Feast”. You may be interested to read about some of Tom Jung’s early recording experiences with DSD in this Sound Stage Network interview from 2002: https://www.soundstagenetwork.com/surrounded/surrounded200204.htm

So while Choral is not the genre of music I’m usually associated with, it is also not at all foreign to my ears and liking. No other info was provided with the audio so I know nothing about the performing choir, location or other details. 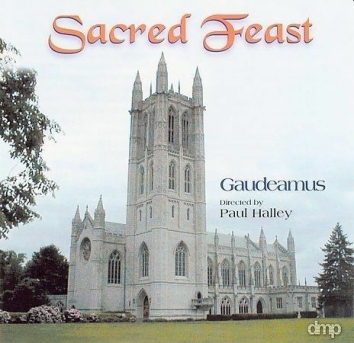 I started the listening comparison of the original DSD64 native DSD master to the remodulated DSD256 version by playing just a few seconds of the first track “Beati Quorum Via” and then switching to the higher resolution version of the same track. There was no doubt about the differences I heard in these first seconds as well as throughout the entire piece.

The singing unfolds with centered sopranos then layered voices added in the first 10 seconds. I paid attention to hearing the scope of the singing get wider and higher in dimension as voices are added. Overall, the width of the voices of the DSD64 master stayed inside an alignment with my ears meaning the sound did not extend much beyond either ear to the right or left stage and walls. As voices are added in the first few seconds they begin to fill the rear of the stage and emanate upward towards the ceiling, still not increasing the width. At 0:18 to 0:21 lower voices add to bottom layers of the sound stage as if below ear and chin level as well as further fill in the center stage sound.

Upon listening to the NativeDSD DSD256 remodulation at the exact same mid range volume level, I heard the actual noise floor in the opening seconds for the first time. In my perception this gave the piece a more realistic initiation, one that I am used to and comfortable with from my own studio recordings. The point I make here is that there was more detail in the audition even before the performers began to sing.

There is a speaker in the room

As the DSD256 reproduction of the singing began I sensed a complete difference in orientation to the way the sound was being presented to my ears. The preceding DSD64 suddenly occurred to me to have sounded like it had come through physical speakers in the room. The DSD256 sounded very much like just a nice large room without speakers directing the sound to my ears. Yes this is called transparency.

At 0:06 when the second layer of voices begin, the DSD256 master locates those voices carrying well to the left and right of the more rigid central stage location boundaries I’d heard earlier. The sound now appeared to be a very natural reflected room reverberation using the side and back walls. The music flowed much more naturally all the way to its trailing decays at the room’s far left and right (0:06 – 0:18).

In addition, from the very beginning the singing reached a much more natural high ceiling and back wall in the room. This was missing as a well rounded and complete hall sound in the DSD64. To put it simply, the DSD256 reproduction filled the room with natural decays and trails of sound missing from the DSD64. What a great hall! I did not get that same sense of spacious hall in the original DSD64 reproduction. The DSD256 is not a remaster of the work, it is a remodulation, to me an important distinction. It is 100% the same master with noise moved further up the audio spectrum and perhaps even lower time distortion. To my ears, detail I can associate with acoustic music in acoustic spaces is very much improved.

The lower voices beginning at 0:18 in the DSD256 master then take a much more formidable shape on the stage from front to rear when they begin. It fills in wonderfully with some of the different notes sung appearing in other spaces in the room above the stage (0:24 – 0:28). By the time all voices are singing at 0:40 all locations in the hall have already been sonically defined and now filled in accordingly in full concert. More bass notes at 0:50 descend from the stage as if on a moving staircase.

Another graceful and more natural handling of the sound by the 22.5mbps remodulation at 1:24 – 1:30 is the crescendo delivered in the upper registers that pin the ceiling meter (my phrase) to its fullest. The DSD64 doesn’t handle these frequencies at those levels nearly as well, instead taking a more resinous sound that feels better when it passes.

A Room With A Sound

The room’s acoustics are then displayed perfectly at 1:31 – 1:56 where full stops and decrescendos left me with nothing more than the air in the concert space. Quite amazing  to hear. The DSD64 does something similar with that air but only seemed to use maybe 50% to 60% of the stage and entire space, again focused in the center, not reaching to the left and right walls nor fulfilling the other directions forward, rear, up and down as well. I again use the focal speaker metaphor to describe this DSD64 delivery over the wide, more fluid and full room DSD256. They are completely different in sound though the volume is the same!

I have only described the first half of the piece (3:52 total). The remaining minutes repeated many of the same comparative distinctions I’ve pointed out here. It’s important to note that both recordings are phenomenal as artistic works. I believe anyone would enjoy hearing either DSD resolution regardless of their musical genre preferences. This is an astounding performance and recording.

To my ears the original DSD64 master can be described as wonderful recording to hear while the DSD256 is better described as a river of sound to listen to and be carried by. Based on my earlier comparisons of NativeDSD’s remodulations of my own work up to DSD512, I am now quite anxious to hear this same piece delivered at the higher 45mbps resolution if it is available.

Testing The Borders Of Sacred

My favorite track on this album is #13, “O Sacrum Convivium”. The singing here seems to stretch all that is sacred with regard to sonic reproduction edging in from what I heard then imagined as a most quiet restful lapping surf to a cataclysm of light sabers duking it out in some netherworld. The recording and DSD reproduction here, particularly DSD256 in my comparison are nothing other than other worldly.

[Note: I’ve been told that the first three DMP releases at NativeDSD.com are currently scheduled for release on August 28, 2020].